There are many great Holiday Performances in Round Rock and the greater Austin area.  We wanted to compile them all together to help you plan the Holiday season.

Spending time with family and friends is a huge part of what makes the Holiday Season so special. What better way to make memories (or start family traditions) than by attending a local fine arts performance? Our family looks forward to holiday performances every year. Below are some of the local performances this year.

Holiday Performances
in Round Rock

The players at the fictional KPNF radio station return to put their stamp on another holiday classic: Miracle on 34th Street. As they bring to life the entire story through dozens of character voices and live foley sound effects, you’ll be re-introduced to Kris Kringle, the charming Macy’s mascot put on trial for claiming to be the real Santa Claus. Besieged by commercialism and disillusionment, winning the trial and restoring his friends’ faith in the most precious, intangible parts of Christmas will require Kris to perform nothing short of a miracle! More details

On a snowy Christmas Eve, a grandfather entertains his rambunctious grandchildren with stories from around the world, teaching them all the true meaning of Christmas and passing along family traditions to the next generation. More Details

The Round Rock Community Choir is hosting their annual Sounds of the Season Concert on December 18. More Details

Catch one of your favorite Holiday movies at the drive-in this season!

Let the Williamson County Symphony Orchestra bring you joy, laughter & beautiful music that is FREE of charge, during this Christmas season. The program features selections from ‘The Polar Express’, ‘The Nutcracker Suite’, ‘Procession of the Nobles’, ‘Sleigh Ride’, and more!  More Details

From the author of the popular Faith County and An Evening of Culture – Faith County II comes a completely hilarious adaptation of the holiday classic, A Christmas Carol. More Details

Calling all mice, toy soldiers, snowflakes, and sugar plums! Chaparral Ice presents The Nutcracker On Ice at the spectacular Crossover in Cedar Park, Texas! Join us as a cast of 60 skaters take the ice for a night of magic, music, pageantry and excitement! Friday and Saturday, Dec. 10-11, 7 p.m. each night! More Details

Catch one of your favorite Holiday movies at the drive-in this season!

After two years, Austin’s hottest holiday tradition is BACK, with all-new music and surprises to ring in the season. ZACH’s singular adaptation of Dickens’ A Christmas Carol is a musical sleigh ride through rhythm and time, infusing the traditional Victorian story with a score that spans all genres and eras. This family-friendly spectacular creates an infectious spirit that has everyone dancing in the aisles. Celebrate the season with the loving Cratchit family and three soulful ghosts as they take Ebenezer Scrooge on a joyride to rediscover his heart and love for human kindness. More Details

This holiday season, the beloved tradition that has captured the hearts of families everywhere returns to the live stage! The Elf on the Shelf: The Musical is the thrilling spectacle of music and dance that transports audiences to the North Pole to glimpse the magical lives of Santa’s Scout Elves. Featuring an original story and score, dazzling sets and costumes, and heartfelt moments that will bring the family together, this joyous and uplifting celebration will leave audiences captivated by the splendor of the season. More Details

The Paramount Theatre will be presenting some fun Holiday movies this month! More Details

The Nutcracker
The Long Center
December 4-23

From the scrumptious sets and costumes to the colorful characters you adore, Ballet Austin’s annual production of THE NUTCRACKER is Austin’s favorite holiday tradition! Hundreds of dancers perform Stephen Mills’ enchanting choreography to Pyotr Tchaikovsky’s magical score with live accompaniment from Austin Symphony Orchestra. Share this sweet treat with your favorite people and celebrate the season with Ballet Austin.
More Details Holidays in Round Rock: Holiday Performances 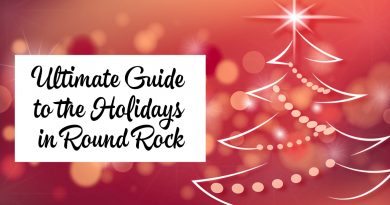 Ultimate Guide to the Holidays in Round Rock