We are so very blessed to live in such a great city – Round Rock is unique in that it’s big enough to have everything that we need, but still has that small town feel.  Many of you know, I started Round the Rock because I wanted everyone to know and take advantage of all the fun things there are to do here in the Rock.  In the spirit of Thanksgiving, I thought it would be fun to reflect on 30 things that make me Thankful to live in Round Rock.

30 Reasons why I’m Thankful to live in Round Rock
Day #9: The Round Rock Police Department 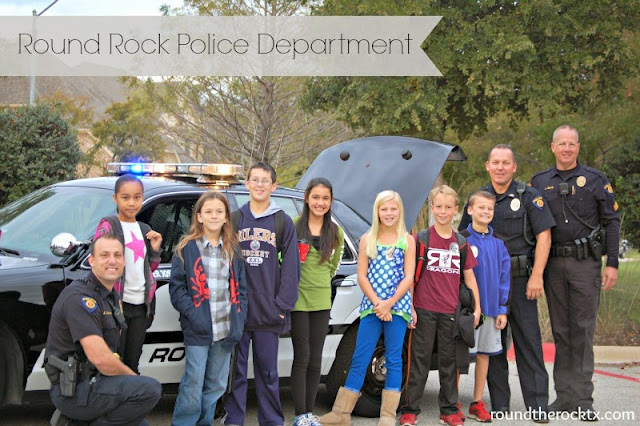 It may sound cliche’ that I am thankful for our Police Department here in Round Rock.  Yes, I am very grateful that this solid group of men & women protect our streets & neighborhoods so well – keeping it a safe town to live in.  But I am thankful for the RRPD for a few different reasons.

The first?  Snakes. What? Let me explain.

Our first year living down here in Central Texas, we lived in a neighborhood that was still being built.  Consequently, we were introduced to all sorts of scary creatures – I’m talking scorpions that sting you as you are sleeping and huge hogs with tusks that tear up your front lawns (I thought we lived in a city!!).  But no creature scared me as much as the coral snake we found in our front yard at 9 pm one evening.

So instead of grabbing the hoe, like any normal Texan would do, we called Animal Control.  Since it was after hours, they refer you to the police department and no less than 10 minutes later a patrol car pulls up.

The police officer they sent over was prepared as he opened his trunk and pulled out a bucket and a long snake grabber (I am sure it has an official name for it…..).  With no hesitation, the officer plunked up the snake and popped him in his bucket.  And with a wink, told us he’d easily get rid of him for us. 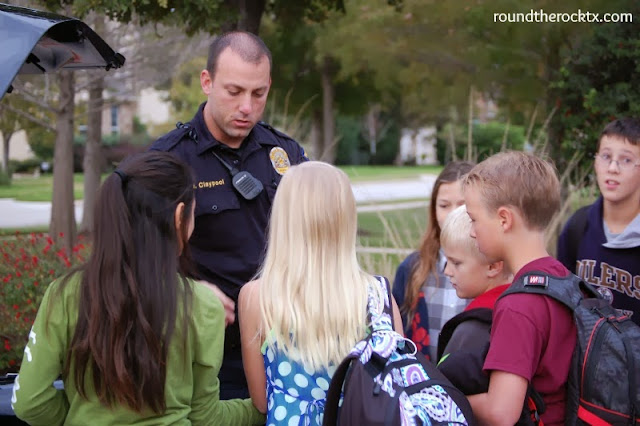 But in all seriousness, I have never encountered a RRPD officer who was rude or ill-tempered.  Don’t get me wrong, I have never had the opportunity to witness an officer who needed to be.  But I find the Department as a whole to be very friendly and helpful.  It just builds to that sense of community that we have in Round Rock when those in Public Safety are so very approachable.

As seen yesterday, as 6 RRPD Officers met with 5th graders who had won a contest at their school.  Officer Joseph Claypool, RRPD Community Affairs Officer, took the time to show them his car, let them try on tactical vests, and take pictures.  The children were then escorted up to school in the police cars.  It was a fun opportunity for the children and you could tell the officers really enjoyed meeting with them as well. 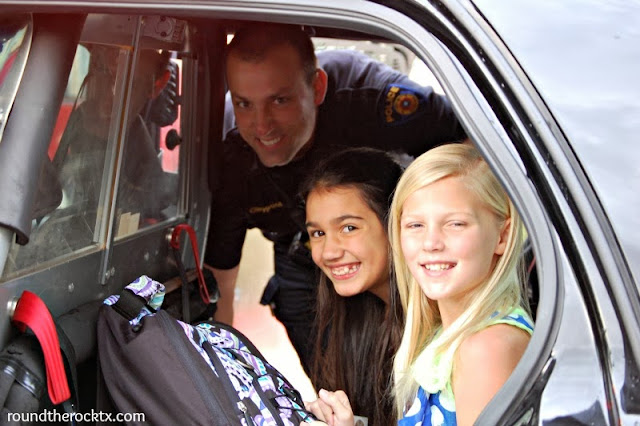 I love that these 6 officers took the time out of their busy day to meet with the children.  I love that these officers were funny & friendly, showing the kids how great our police officers are.  I love that we live in a community that is small enough to allow for great opportunities like this to happen.  Just a few of the many reasons I am Thankful for the Round Rock Police Department.


Just a small disclosure here – I am not receiving any financial compensation to tell you what I am thankful for in Round Rock. I am simply telling you about places, objects, & opportunities that have blessed me & my family.
Want to catch up on the 30 Reasons I am Thankful to Live in Round Rock?
Day 1: Round Rock Parks & Rec Employees
Day 2: Round Rock Market Days
Day 3: Play for All Abilities Park
Day 4: Hairy Man Road
Day 5: Round Rock Donuts
Day 6: The Round Rock
Day 7: Prete Main Street Plaza
Day 8: Chuy’s Texas Martini
Day 9: Round Rock Police Department
Day 10: Rockin’ City Rollergirls
Day 11: Memorial Park
Day 12: Art By the Glass Studio
Day 13: Bats of Round Rock
Day 14: Round Rock Public Library
Day 15: The Yogurt Experience
Day 16: Teachers of Round Rock
Day 17: Rock N’ River
Day 18: Kaleidoscope Toys
Day 19: Sam Bass Shootout
Day 20: Round Rock Express
Day 21: Round Rock Dog Depot