In a show of support for healthcare workers in Texas, the United States Afir Force Thunderbirds will be flying over both Austin and San Antonio on Wednesday, May 13, 2020.

When we originally reported this happening, the Thunderbirds were scheduled to fly over on Tuesday, May 12. Due to inclement weather, they have changed the day to Wednesday, May 13 at 2:40PM.

UPDATED AS OF WEDNESDAY, MAY 13: Due to inclement weather, the new scheduled time for the flyover is 3:40PM.

The flight plan is listed below.

In a press release from Nellis Air Force Base:

The U.S. Air Force Air Demonstration Squadron, the
Thunderbirds, will honor frontline COVID-19 responders and essential workers with formation flights over San Antonio and Austin May 12.

“We are honored to extend our gratitude to Texans in San Antonio and Austin who have been working hard to keep their communities safe,” said Lt. Col. John Caldwell, Thunderbirds commander and leader. “We want Texans to look up to see the display of American resolve and know that the American spirit will prevail beyond this difficult time in our nation.”

A formation of 6 F-16C/D Fighting Falcons will conduct these flyovers as salute to healthcare workers, first responders, military, and other essential personnel while standing in solidarity with all Americans during the COVID-19 pandemic.

Residents along the flight path can expect a few moments of jet noise as the aircraft pass overhead, along with the sight of 6 high-performance aircraft flying in precise formation.

Flyovers in San Antonio will start at 1:20 P.M. (CDT) and last approximately 30 minutes.

Flyovers in Austin will start at 2:30 P.M. (CDT) and last approximately 25 minutes.

Residents in these areas will be able to see the flyover from the safety of their home-quarantine and should maintain all social distancing guidelines during this event. They should also refrain from traveling to landmarks, hospitals and gathering in large groups to view the flyover.

A detailed flight route will be released on the day prior to the flyover.
The flyover date and times are subject to change due to weather and operational requirements.
The team welcomes viewers to tag the flyover on social media with the hashtag #AmericaStrong and #Thunderbirds.

We will post the detailed flight route as soon as we see it – hoping they fly over the Round Rock area too! 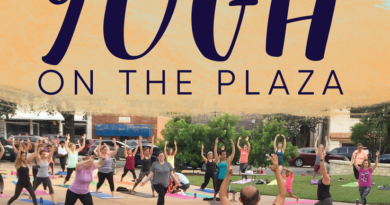